Rosenberg Alfred - The track of the jew through the ages 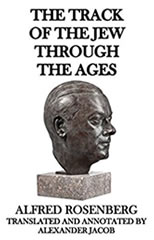 Author : Rosenberg Alfred
Title : The track of the jew through the ages
Year : 1937

Foreword. The Track ofthe Jew was my first work; written in 1919, it appeared in 1920. Since, later, in the battle, contemporary discussions found an immediate interest, it was, after the sale ofthe first edition, no longer published anew. But today, since all questions of education and schooling require a deep study, this work written 18 years ago will contribute its bit to the understanding ofthe Jew and his footprint through the ages since it is based in large part on Jewish sources that were until then unknown to anti-Judaism. I have not needed to make any corrections - apart from a stylistic check - since nearly everything was prepared by me. In the final chapters it was possible to soften some personal attacks against politicians and shorten some extracts of an intellectual historical sort. So I hope that the new edition will be of use for the understanding of the unchangeableness of the Jewish nature. For the future, everything depends on whether the coming generations understand the deep necessity ofthe battle of our age so that they do not become tired and weak, like those who were before us. Berlin, March 1937. A.R.. ...