« Roth Cecil - The jewish contribution to - Rule James B. - Privacy in peril »

Roth Cecil - A history of the Marranos 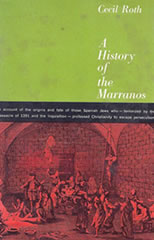 Author : Roth Cecil
Title : A history of the Marranos An account of the origins and fate of those Spanish Jews who - terrorized by the massacre of 1391 and the Inquisition - professed Christianity to escape persecution
Year : 1932

I have the great honor to present to the Reader, in the following pages, what may fairly be described as the most romantic episode in all history. As long ago as 1894, Joseph Jacobs indicated “one of the great desiderata of Jewish literature - a... history of the Marranos or secret Jews of the Peninsula.” That lacuna is here filled, for the first time. It is hoped that the interest in it will not be confined to the Jew. The record of the “New Christians” is an inseparable part of the stories of Spain and Portugal, at the period of their greatest brilliance. It constitutes a fundamental, though tragic, chapter of ecclesiastical history. It touches on the life of every country of Western Europe in the seventeenth and eighteenth centuries, at crucial points. It is the background to the biography of countless persons of the highest eminence, both in the Peninsula and abroad. It had important reactions in politics, literature, science, and commerce. Throughout, it received lurid illumination from the flares of the autos-da-fè. Each of these aspects deserves a whole volume. I stand astonished at my own moderation in having compressed them into chapters, or even paragraphs. ...

« Roth Cecil - The jewish contribution to - Rule James B. - Privacy in peril »