« Roth Cecil - The jews in the defence of Britain - Marrs Texe - Days of hunger, days of chaos »

Roth Cecil - History of the jews in England 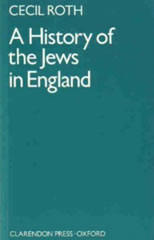 Preface. Cecil Roth Centre. IT is curious that none of the great Jewish communities of the western world found an historian so early as the numerically tmimportant nucleus in England. The first formal history of the Jews in this country was, in fact, published more than two centuries agothe Anglia Judaica of Dr. D'Biossiers Tovey, like myself a member o rerton College, Oxford ('by me never to be mentioned without terms of Affection and Respect', if I may be permitted to repeat his words). This comprehensive work, which can still be consulted with profit, was itself based on the researches of the Exchequer historian Madox and the anti-Semitic pamphleteer Prynne, the latter having published his findings eighty years earlier as a contribution to the debate under the Commonwealth on the readmission of Jews to England. The results of this early interest in the subject have not been altogether good; for the general histories of Anglo-Jewry, produced in a more scientific age and with access to vast new stores of information, have tended to be based upon their remote forerunners with a fide lity which is often noteworthy and sometimes regrettable. This is the reason for the present attempt to furnish a completely new work on the subject, summing up the results of the voluminous and exceptionally important researches of the last half-century. ...

« Roth Cecil - The jews in the defence of Britain - Marrs Texe - Days of hunger, days of chaos »