Roth Cecil - The jews in the Renaissance 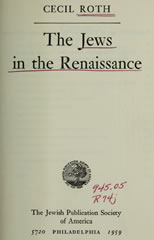 Author : Roth Cecil
Title : The jews in the Renaissance
Year : 1959

Preface. This work is an experimental study of the interaction of two societies and of two cultures at one of the seminal periods of the world's history. I had originally intended to interpret my terms of reference more rigidly and, taking the Jewish world as a whole into my survey, to restrict myself to the main tide of the Renaissance in the fifteenth century and the first half of the sixteenth. But I found that this would have conveyed a wholly false impression. For the essential contribution of the Jews, as Jews, to the Revival of Learning came not during the so-called Greek Renaissance which was stimulated by the fall of Constantinople in 1453, but at an earlier stage, in the original and in many ways more significant renewal based on the Latin (and ultimately Arabic) texts. On the other hand, in the history of music and the history of stagecraft - aspects in which the Renaissance was protracted into the age of the Catholic Reaction: the coincidence is not accidental - Italian Jewry's share was considerable, and in certain respects (according to some enthusiasts) fundamental. ...