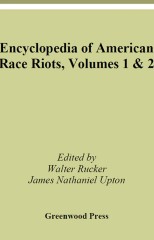 Foreword : american race rioting in historical perspective. The Encyclopedia of American Race Riots provides interpretive accounts of collective violence involving black and white Americans from the Civil War through the early twenty-first century, often with reference to related forms of bloodshed and implications for other minorities throughout our history. In nearly 265 entries written by eighty scholars from various fields, it identifies key incidents, individuals, and organizations, as well as concepts, events, themes, and trends associated with the acts of bloodshed and responses to them—including song and poetry. Thus the encyclopedia presents riots, lynching, vigilantism, and murders in the context of everyday life for specific eras and regions, revealing the human agency of participants and victims, the role of racism in these purposeful bloodlettings, and the transformation of racial violence over time. It also provides twenty-three primary sources, an extensive bibliography, a related topics guide, a chronology of American race riots and racial violence, a detailed subject index, and powerful illustrations. Above all, it raises critical questions: What are riots? Why do they occur? When do they happen? How do they differ from one another and from other forms of collective violence? Who riots, and why? Why are riots and rioters significant? How do they compare with other forms of mob violence and participants? The key to answering these queries lies in the interaction of several factors, none more significant than the ideology of white racism. Seventeenthcentury English colonists entered the Americas as the Western world was experiencing its commercial revolution and nascent industrial revolution. In this context, Europeans came to see themselves racially and culturally superior to less advanced colored peoples. They wrongly equated progress with technological change alone and wrongly believed the rest of the world to be static and without historical worth. They forgot, dismissed, or denied, past recognition of complex West African kingdoms, for example Mali, whose Mansa Musa (1312–1337) appeared on European cartography from 1339 to 1750. Whiteness, Christianity, and Civilization connoted more than ethnocentrism—the uniqueness that all groups experience—and evolved into cultural arrogance. ...