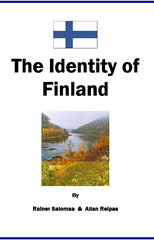 We have seen a monumentous amount of proof that England and the U.S.A. are descendents of the tribe of Joseph and bear the name of Israel, but what about the other Isralitish tribes, and more specifically, what about the modern identity of the tribe of Issachar? Seeing that I was born in Finland and that Allan is of direct Finnish descent, we have a particular interest in the identity of the Finnish people. The material presented is a composite of both of our research. Allan has contributed a great deal more than I have so most of the credit for the material presented actually belongs to him. (He is a university graduate of chemistry who is living in Montreal right now.) In Gen. 49:14-15, God says that “Issachar is a strong ass couching down between two burdens; and he saw that rest was good, and the land that it was pleasant; and bowed his shoulder to bear, and became a servant unto tribute.” “Issachar” comes from the Hebrew word “Yissaskar,” meaning “He will bring a reward.” It comes from the word “sakar” which means “payment of contract, concerning salary, fare, maintencance.” Now the country of Finland is internationally known for paying off her contracts. She is the ONLY nation paying off her World War I debts to the U.S.A.! Also, at the end of World War II she lost some of her most valuable territory in the Karelia region to the Russians. This was about 11% of the country’s total area, including 10% of its arable land, 11% of its forests, and 10% of its industries. On top of this, she was burdened with paying off the staggering amount of $300,000,000 in reparations to the Russian bear. The nation tightened its belt, paid off the entire amount by 1952, and hosted the summer Olympics that same year. When God says, “Issachar is a strong ass ...” He means it. Their national stubbornness can be graphically illustrated in their annuls of World War II. The nation fought the Russian bear almost single-handed even when they were vastly out-numbered. They had 9 divisions of 15,400 men per division compared with between 26 and 29 divisions of 18,700 men per Russian division. The Finns only had 56 tanks compared with 2000 Russian tanks. Yet in spite of being so vastly out-numbered, they held the Russian bear at bay for about three years ! ...