Sayce Archibald Henry - The races of the old testament 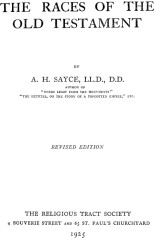 Preface to first edition. The following pages must be received with the indulgence due to first attempts in a new field of research. Ethnology itself is but a young science, still busied in collecting its facts and arranging its materials ; Biblical ethnology is younger still. Indeed, it is only within the last three or four years that a study of the ethnology of the Old Testament has become possible. We owe the greater part of the materials upon which it must be based to that prince of living excavators and practical archseologists, Mr. Flinders Petrie. The casts and photographs of the ethnographic types represented on the Egyptian monuments, which he made for the British Association in the winter of 1886-7, have at last given us a solid foundation upon which to work. To Mr. R. S. Poole belongs the merit of first calling the attention of anthropologists to the unexplored mine of facts preserved in the pictures of the ancient Egyptian artists, and to the leading members of the Anthropological Institute that of obtaining a grant for their reproduction. But the grant by itself would not have carried us very far ; there were needed the seeing eye and the observing mind of the explorer, to select the most typical and best preserved examples, and to photograph or model them with scientific skill. The results of Mr. Petrie's labours are given in the Report of the British Association for the Advancement of Science for 1887, in a report by Mr. Petrie himself on " Racial Photographs from the ancient Egyptian Pictures and Sculptures," and in a supplementary paper by the Rev. H. G. Tomkins on the " Collection of Ethnographic Types in Egypt." Further articles on the same subject have been published by Mr. Tomkins and Mr. Petrie in the Journal of the Anthropological Institute, and the Babylonian and Oriental Record, references to which will be found in the footnotes to the present volume. With characteristic generosity, Mr. Petrie has allowed an unrestricted use to be made of his photographs in illustrating the pages which follow. Those who desire a complete set of the photographs, which number several hundreds, can obtain them at the low price of 45$. from Mr. Browning Hogg, 75, High Street, Bromley, Kent. ...