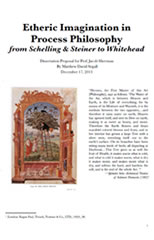 Abstract. This dissertation interprets the process philosophies of Friedrich Wilhelm Joseph von Schelling (1775-1854) and Alfred North Whitehead (1861-1947) as early and late modern expressions of what esotericist Rudolf Steiner (1861-1925) called etheric imagination. Understanding the process philosophies of Schelling and Whitehead requires first coming to share the imaginative background animating their ideas: both were major contributors to the paradigm-remaking natural sciences of their day, and both were expressions of the Romantic reaction against Enlightenment rationalism. In order to better grasp their novel contributions to modern science and philosophy, I diachronically situate Schelling and Whitehead in relation to their shared esoteric sources and intellectual influences dating back to Plato, as well as synchronically trace how their ideas have continued to reverberate through various streams of post-modern thought. I draw connections between Schelling’s alchemically inspired Naturphilosophie and Whitehead’s geometrically intuited philosophy of organism by reading them in light of Steiner’s esoteric conception of an etheric reality that mediates between spirit and nature, or mind and matter. The process-philosophical imagination is depicted as the emergence of an etheric organ of perception granting the process philosopher sub- and super-sensory insight into the nature of cosmogenesis. My dissertation will argue that the process-philosophical imagination, especially when read through the lens of Western esotericism, offers an alternative conception of modern science and rationality that can serve as the basis of a more ecologically grounded planetary civilization. ...