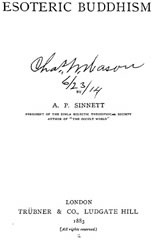 Preface. The teachings embodied in the present volume let in a flood of light on questions connected with Buddhist doctrine which have deeply perplexed previous writers on that religion, and ofler the world for the first time a practical clue to the meaning of almost all ancient religious symbolism. More than this, the Esoteric Doctrine, when properly understood, will be found to advance an overpowering claim on the attention of earnest thinkers. Its tenets are not presented to us as the invention of any founder or prophet. Its testimony is based on no written scriptures. Its views of Nature have been evolved by the researches of an immense succession of investigators, qualified for their task by the possession of spiritual faculties and perceptions of a higher order than those belonging to ordinary humanity. ...