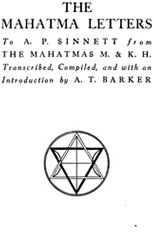 Author : Sinnett Alfred Percy
Title : The Mahatma letters to A. P. Sinnett from the Mahatmas M. & K. H. Transcribed, Compiled, and with an Introduction by A. T. Barker
Year : 1923

Compiler's preface. It will be seen, if reference is made to the " Contents " that the letters have been arranged in 7 Sections and an Appendix. The former contain nothing but Mahatma letters, while in the latter some letters have been added from three pupils of The Mahatmas M. and K.H.— : H. P. Blavatsky, T. Subba Row, and Damodar K. Mavalankar, not only for their intrinsic merit, but because they help to make clear questions arising in the main part of the book which would otherwise be left obscure. The seven Sections suggest themselves as more or less natural divisions, but it should be remembered that as letters in one section often contain matter which also relates to the other Sections, considerable overlapping is unavoidable. However, an attempt has been made and that is the best that can be said. The contents of each Section are arranged where possible chronologically, in the order of their receipt. The reader must bear in mind that with only one or two exceptions none of the letters were dated by the writers thereof. On many of them, however, the dates and places of receipt have been noted in Mr. Sinnett's handwriting, and these appear in small type immediately under the Letter Numbers. ...