Sinnett Alfred Percy - The growth of the soul 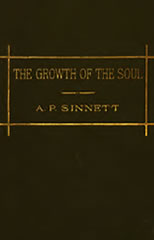 Author : Sinnett Alfred Percy
Title : The growth of the soul A sequel to "esoteric buddhism"
Year : 1905

Preface to the first edition. The gulf which lies between the thinking of the ordinary world in reference to matters having to do with the destinies of the human soul, and the position occupied by those students of the school with which I am specially concerned, is widening, year by year. "Current teaching," as Mr. Balfour has called it, stands still; knowledge concerning the conditions of existence in ultraphysical realms of Nature has expanded enormously for those who have sought it the right way during the last fifteen years, and is expanding with ever-increasing rapidity. ...