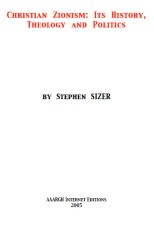 Chapter 1. Introduction: Christian Zionism Defined. At its simplest, Christian Zionism has been defined as 'Christian support for Zionism.' In Der Judenstaat, published in 1896, Theodor Herzl forcefully articulated the aspirations of Jewish Zionists for their own homeland, although the Zionist dream was largely nurtured and shaped by Christian Zionists long before it was able to inspire widespread Jewish support in the 1940's. At the First Zionist Congress which Herzl convened a year later in Basle, the Zionist aspiration was formulated in a call for a, 'publicly secured and legally assured homeland for the Jews in Palestine.' At the 27th Zionist Congress held in Jerusalem in 1968, Zionism was defined in terms of five principles: 1) the unity of the Jewish people and the centrality of Israel in Jewish life; 2) the in-gathering of the Jewish people in its historic homeland, Eretz Israel; 3) the strengthening of the State of Israel; 4) the preservation of the identity of the Jewish people; and 5) the protection of Jewish rights. Sharif understands political Zionism to be '...the ideological instrument for mobilizing international support for an exclusively Jewish state in Palestine.' She observes how in 1975, the United Nations General Assembly passed resolution 3379 (XXX) defining Zionism as, 'a form of racism and racial discrimination.' It was no longer politically correct to view Zionism as merely another national liberation movement, in this case for Jews. Uri Davis has written probably the most critical book on the realisation of the Zionist goal, entitled, Israel, an Apartheid State. Contemporary Christian Zionism is in part a reaction to this world-wide criticism. So, for example, in 1967, following the passing of U.N. Resolution 242 in protest at Israel's occupation of the West Bank, and Palestinian Jerusalem, when the entire international community closed their embassy's in Jerusalem, the International Christian Embassy moved to Jerusalem expressly to show solidarity with Israel. They and other Christian Zionists believe that the modern State of Israel, and Zionism in general, are divinely mandated, the fulfilment of God's promise to Abraham. 'I will bless those who bless you, and whoever curses you I will curse; and all peoples on earth will be blessed through you.' (Genesis 12:3) So, Hal Lindsey could assert, 'The center of the entire prophetic forecast is the State of Israel." Christian Zionists see themselves as defenders of, and apologists for, the Jewish people, and in particular, the State of Israel. This support involves opposing those deemed to be critical of, or hostile toward Israel. It is rare therefore to find Christian Zionists who feel a similar solidarity with the Palestinians. ...