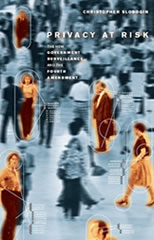 Preface. This book is about an insidious assault on our freedom and the failure of the law to respond to it. The assault comes from government monitoring of our communications, actions, and transactions. The failure results from the inability or unwillingness of courts and legislatures to recognize how pervasive and routine this government surveillance has become. To ensure that this powerful tool is not abused, this book argues that something equally powerful—the Constitution, and in particular the Fourth Amendment to the Constitution—must stand guard. All of us are familiar with electronic surveillance—wiretapping, bugging, and the like—because it has been with us for almost a century. This book focuses instead on a significant new development in the government’s surveillance efforts: the use of sophisticated technology to observe our daily activities (physical surveillance) and to peruse records of those activities (transaction surveillance). Our wanderings, our work, and our play can now be monitored not only through binoculars and other types of telescopic lenses but also with night scopes, tracking mechanisms, satellite cameras, and devices that detect heat and images through walls. Transactional information, even that which is financial and medical in nature, is often readily accessible via snoopware, commercial data brokers, and ordinary Internet searches.While some of these technologically enhanced investigative techniques have been around for several decades, most have been developed more recently, and law enforcement use of these techniques (old and new) has increased geometrically in the wake of September 11, 2001. ...