Smith Geoffrey - The edict of expulsion of 1290 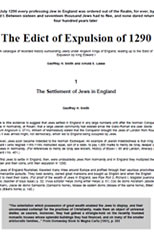 A catalogue of recorded history surrounding Jewry under Angevin Kings of England, leading up to the Edict of Expulsion by King Edward I. On 18 July 1290 every professing Jew in England was ordered out of the Realm, for ever, by King Edward I. Between sixteen and seventeen thousand Jews had to flee, and none dared return until four hundred years later. ...