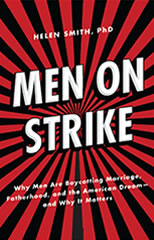 Author : Smith Helen
Title : Men on strike Why men are boycotting marriage, Fatherhood, and the American dream — and why it matters
Year : 2013

Prologue. Enslavement used to be based on race, now it’s based on gender. —Carnell Smith, advocate for male paternity fraud victims If you are a wimp, this book is not for you. The suggestions I make in this book are difficult and require sacrifice and if you, as a male, do not feel you are up to the challenge, put this book down and go elsewhere. What I am going to describe to you requires a revolution to change the culture, and thus the political climate in this country that allows laws and actions against the male sex that would never be allowed against the female one. Perhaps you think this is fair, that men should suffer for the ills of their ancestors and for the discrimination against women in the past. Maybe you are a chivalrous white-knight type who loves nothing more than the thought of saving a damsel in distress and would like to see your fellow man brought to his knees by laws that limit men’s reproductive and personal lives as well as their livelihoods. Maybe you have political ambitions or work in a field that requires you to favor female privilege over male justice and you have no intention of changing because you benefit from this two-way arrangement. ...