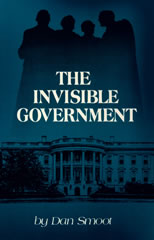 Foreword. When The Invisible Government was first published fifteen years ago, almost no one had heard of the Council on Foreign Relations and its affiliated organizations, and of those who had, still fewer realized their significance. If the situation has changed in the last fifteen years-and it has-this book deserves a great deal of the credit. The Invisible Government was first published in 1962-before the Kennedy and King assassinations, before the Vietnamese War, before Watergate. In 1977 it is not so difficult to believe in political conspiracies as it was in 1962, yet many persist in their disbelief. When Dan Smoot listed some of the members of the CFR occupying positions in the Kennedy Administration, the reaction was one of skepticism. When The Review Of The News listed the members of the Trilateral Commission (a recent creation of the Chairman of the CFR) who occupy positions in the Carter Administration in 1977, the reaction was quite different. The difference is but one example of the effect of The Invisible Government, not only on the reading public, but also on those writers who have picked up the story where Dan Smoot left off. ...