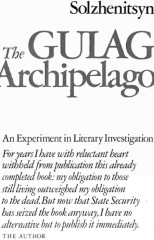 It is a question if any work of literature in our era other than The Divine Comedy is commensurate with The Gulag Archipelago in structure, scale, multiplicity of incident and characters, emotional range, variety of inflection and, above all, in the staggering magnitude of its underlying concept. In this masterpiece, the author of One Day in the Life of Ivan Denisovich and The First Circle has orchestrated thousands of incidents and individual histories into one narrative of unflagging power and momentum. Written in a tone that encompasses Olympian wrath, bitter calm, savage irony and sheer comedy, it combines history, autobiography, documentary and political analysis as it examines in its totality the Soviet apparatus of repression from its inception following the October Revolution of 1917. The "Archipelago" of Mr. Solzhenitsyn's work is the network of secret police installations, camps, prisons, transit centers, communications facilities, transporration systems and espionage organizations which, in his view, honeycombs the length and breadth of the Soviet Union. Drawing on his own experience, material from Soviet archives, cases collected during his eleven years of labor camps and exile, and the evidence of more than 200 fellow prisoners, Mr. Solzhenitsyn concludes that the secret police are the vital element of the Soviet regime, and have been ever since its founding by Lenin. Numerous studies of the Soviet system of control have been published in the West but until now nothing so complete, so carefully documented and assembled, and never before has a literary giant devoted his gifts of narrative and characterization to the enterprise. Solzhenitsyn has here created and peopled with brilliantly portrayed human beings a vast, overarching fresco of that state within a state which is the Gulag Archipelago. Thomas P. Whitney, the translator, has also translated both One Day in the Life of Ivan Denisovich and The First Circle, and is a leading authority on Russian culture and the Soviet Union. ...