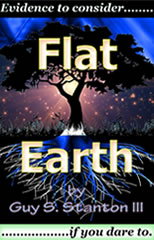 Author : Stanton III Guy S.
Title : Flat Earth A handbook meant to help those in pursuit of the Truth Evidence to consider if you dare to
Year : 2018

Dedicated to all the intrepid explorers before me who opened up the way for a late comer to grasp a truth never really considered before that now in realization has in its own way affected everything. Some may view the debate of whether the earth is flat or not to be a take it or leave it discourse and while that would be the socially acceptable response to agree to I’m afraid that I cannot. There are few things more fundamental than fully understanding the significance of what we stand on each day and that holds the air for our next breath of life. It’s not a political argument that can be dialed out of because we’re tired of it, because face it, we’ve all been elected to know where we stand on this issue by due point of the fact that we live on this rock. We need to know everything there is to know about the domain that we live in and more importantly for me as a Christian man I need to know whether or not I can trust God, because regardless of what anyone’s opinion may be the Bible is quite simply a Flat Earth book. So for me to believe in a Flat Earth has now come to be a belief, and while it may not be the belief of many yet, it is for the brave ones that this book is dedicated to for their courage to ask the questions and pursue the facts that so many wish to either ignore or deny. ...