Steiner Rudolf - Education as a force for social change 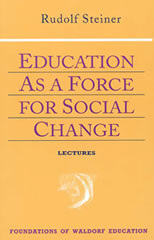 Lecture 1. Overcoming the present social problems through spiritual cognition. The fundamental difference between the East and the West: considering the external sense-perceptible world as maya in the East and the spirit-soul as ideology in the West. The three-pronged attack upon humanity since the fifteenth century through natural science and machines: mechanization of the spirit, vegetation of the soul, and animalization of the body. Concerning the concept of “social democracy.” The historical demand of a threefold social organism: socialism in economics, democracy in justice, and freedom in cultural life. The central question of education. The significance of differing educational principles during the three phases of childhood: 1) imitation until the age of seven is the basis of social freedom; 2) respected authority until the age of fourteen is the basis of a feeling of justice; 3) a general love of humanity after puberty is the basis of fraternity in economics. The fatalistic attitude in peoples’ souls in the East and the West. Modern society: a cultural life based upon Greece, a system of justice based upon Rome, and economics based upon European civilization. The threefold social organism as a means of gaining control of the chaotic economic life, of the power struggle in the realm of justice, and of the empty slogans prevalent in cultural life. Lujo Brentano’s Law as an example of today’s economics. Commodity, Labor, and Capital: understanding these three concepts through Imagination, Inspiration, and Intuition ... ...