Steiner Rudolf - Human history in the light of spiritual investigation 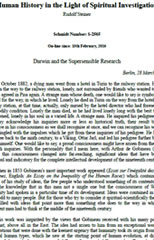 Darwin and the Supersensible Research. Berlin, 28 March 1912. On 13 October 1882, a dying man went from a hotel in Turin to the railway station. He still died on the way to the railway station, lonely, not surrounded by friends who wanted to meet him as agreed in Pisa again. A strange man whose death, one would like to say is symbolically typical for the way, in which he lived. Lonely he died in Turin on the way from the hotel to the railway station, at that time, actually, only nursed by the hotel director who had foreseen his bad bodily condition. Lonely the man died, as he had lived lonely long with the best that he had owned, lonely in his soul in a varied life. A strange man. He inquired his pedigree. Now we may acknowledge his inquiries more or less as historical truth, their result became effective in his consciousness as we shall recognise at once, and we can recognise his work as intermingled with the impulses which he got from these inquiries of his pedigree. He led his pedigree back to the ninth century, to a Viking, Ottar Jarl, and led his pedigree further back to Odin himself. One would like to say, a proud consciousness might have arisen from the result of such inquiries. With the personality that I mean here, with Arthur de Gobineau (1816– 1882), this consciousness changed into far-reaching, significant ideas that have become principal and indicatory for the complete intellectual development of the nineteenth century. When in 1853 Gobineau's most important work appeared (Essai sur l'inégalité des races humaines, English: An Essay on the Inequality of the Human Races) which contained the results of his study of ideas, the few people who understood something of its contents could gain the knowledge that in this man not a single one but the consciousness of Western humanity had spoken in a particular time of its development. Ideas were contained in it that were odd to many people. But for those who try to consider it spiritual-scientifically the work is fulfilled with ideas that point more than something else does to the way in which an excellent man had to think at the middle of the nineteenth century. ...