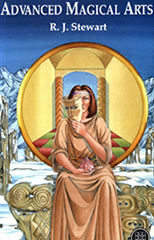 Preface. There is no claim whatsoever that the material in this book is superior or unique. Indeed, as it is drawn from continuing traditions of magical arts, it cannot claim to be beyond the traditions themselves, though it is aimed at potential development of such traditions for the future. This is the companion volume to Living Magical Arts] and some of the concepts and practical work described in that book are developed in detail in the examples of ritual and visualisation in our later chapters. But Advanced Magical Arts is also designed to stand on its own, and is for the reader who is dissatisfied with the plethora of beginners' books on magical or esoteric subjects, and who can already meditate, concentrate and visualise. Thus the contents are advanced in the sense that they are for those who wish to move on from the levels usually found in classes, open groups, or publication, particularly in modern lightweight or popularised books. I would personally hope that it will provide some interest for those who have already left such opening stages, even those well trained in magical work, though I would not presume to be able to 'teach' such people anything, merely to provide some alternative material. Any magician will readily admit that he or she cannot teach; magic is learned through experience once the initial stages have been passed; most self-styled teachers tend to repeat what little they have learned rather than brave any further adventures. ...