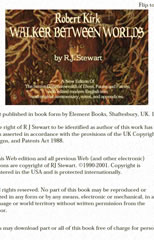 Foreword : by Jennifer Westwood, London, 1990 The road to the fairy knowe. The Secret Commonwealth of Robert Kirk ( 1644-97), minister of Aberfoyle, is one of the most important books about fairies ever written. It is quite the fullest account of the subject from the seventeenth century, a period when many country people in England as well as Scotland still believed implicitly in Fairies and antiquarians such as John Aubrey laboured to record their testimony. Kirk and Aubrey recognized that in their day something valuable was fast being lost from the culture. Fairy belief had long been dying from natural causes - Chaucer as far back as the fourteenth century suggested that fairies were things of the past - but now the process was being accelerated by events. One was the seizure of political control by Protestant radicals under Cromwell's Commonwealth. Unlike the more tolerant Catholics before the Reformation, these extremists - Puritans Presbyterians, and others - viewed things that smacked of paganism, including maypoles, fairies and Christmas, as idolatry, and suppressed them. It is no coincidence that, later, in Wales people said it was the Methodists who had driven out the Fairies. ...