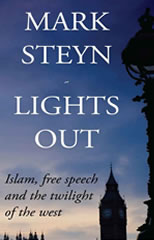 Author : Steyn Mark
Title : Lights out Islam, free speech and the twilight of the West
Year : 2009

Authors's note. I would like to thank Kenneth Whyte, my publisher at Maclean’s, Canada’s biggest selling news weekly, and his colleagues at Rogers Publishing, for standing firm against the attempted appropriation of their property by the Canadian Islamic Congress and various “human rights” commissions. I would also like to salute Ezra Levant, Kate McMillan of Small Dead Animals, Kathy Shaidle of Five Feet Of Fury, and Mark and Connie Fournier of Free Dominion. “These bloggers, long before the mainstream media, recognized the complaints as a politically-motivated threat to free expression,” said Ken Whyte in 2009. “They did a great service to Canadian journalism.” For their courage in standing up for freedoms too many citizens are willing to trade away, they’ve been subject to multiple nuisance lawsuits from the self-proclaimed heroes of Canada’s “human rights” racket. They deserve your support. I thank the editors of the publications in which these columns originally appeared: Ken Whyte and Dianne de Gayardon de Fenoyl at Maclean’s; Ezra Levant and Kevin Libin at The Western Standard; Charles Moore and Martin Newland at Britain’s Daily Telegraph; Peter Murtagh at The Irish Times; and Rich Lowry, Kathryn Lopez and Jay Nordlinger at America’s National Review. As always, I am indebted to my assistants Tiffany Cole and Chantal Benoît. As on previous occasions, we have retained the spellings of the originating publication, whether American, Canadian, Irish, or Waziristani. So, if you don’t like the case for the defence, the case for the defense should be along a couple of pages later. We do, however, have a preference for Britannic punctuation. New Hampshire. March 2009. ...