Stieve Friedrich - What the World rejected 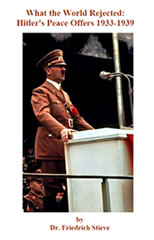 The author, Dr. Friedrich Stieve, was a much-published German author long before the ascent of National-Socialism in Germany. Before the First World War Stieve wrote a book of poems (1908) and a biography of the mediaeval Italian prince Ezzelino da Romano (1909); Stieve apparently began writing history in 1916 with Die Politischen Probleme Des Weltkrieges; in 1920 Gedanken über Deutschland was published, apparently a book reflective of Germany’s unfortunate position at the time. Thereafter Stieve continued to write about the causes of the First World War, especially the role of Russia, including Isvolsky and the World War. During the National-Socialist period Stieve produced several books on German history, including Die außenpolitische Lage Deutschlands von Bismarck bis Hitler. Among the interesting points made here is that Hitler had offered a non-aggression pact to France three years before he offered it to the Soviet Union. There were only two ways to make Germany secure from military encirclement and the threat of a two-front war: a pact with France or with the U.S.S.R. French intransigence forced Hitler to take the latter option. ...