Sturdza Michel - The suicide of Europe 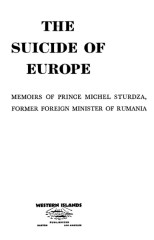 Introduction. But who dares call the child by its right name ? The few who knowing something about it Were foolish enough not to guard it in their hearts, Those who have shown the people their feeling and their thoughts Have been since always crucified or burned at the stake. GOETHE - Faust I. This book is not a history of Europe nor of Rumania nor even of the Legion of the Archangel Michael, but rather the memoirs of one man who has been a witness and a participant in the events which, for hundreds of millions of people, have turned a century so full of promise into an eternity of suffering and slavery . From the first days of the Russian Revolution, this man understood the terrible danger which the Soviet regime represented not only for his own country but also for Europe and the entire world. From that time, his political thinking and activities were unswervingly directed by a growing consciousness of this danger and by the necessity, to which circumstances made him particularly obligated, to inform or to fight those in his nation who were, or pretended to be, blind to the magnitude and the imminence of this peril. ...