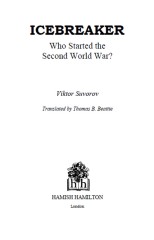 To the Reader. Who started the Second World War? There is no single answer to this question. The Soviet government, for example, has repeatedly changed its official line on the issue. On 18 September 1939, they stated in an official note that the government of Poland was the instigator of the war. On 3o November 1939, however, Stalin named other culprits in the newspaper, Pravda: 'France and Britain . . . attacked Germany, thereby taking upon themselves the responsibility for the present war,' he wrote. By 5 May 1941, the story had changed again : in a secret speech to graduates of military academies, Stalin laid the responsibility on Germany. After the war had ended, this circle of 'culprits' grew. Stalin announced that the most blood-stained war in the history of humanity had been started by all the capitalist countries in the world – in other words, all the sovereign states in the world including Sweden and Switzerland, but excluding the Soviet Union. Stalin's view has long been established in communist mythology. During the times of Khrushchev and Brezhnev, and as recently as Andropov and Chernenko, these accusations against the rest of the world were frequently repeated. Under Gorbachev, much is changing in the Soviet Union, but Stalin's view about who started the war remains unchallenged. Lieutenant-General P. A. Zhilin, chief historian of the Soviet Army, repeated during the Gorbachev era that 'the perpetrators of the war were not only the imperialists of Germany, but of the whole world'. (Red Star, 24 September 1985) I would like to suggest that, from the beginning of the war, the Soviet communists made accusations against every country in the world with the deliberate intention of concealing their own role as its instigators. After the First World War, the Treaty of Versailles deprived Germany of the right to a strong army and offensive weapons, including tanks, military aircraft, heavy artillery and submarines. German commanders were unable to use German territory to train for the waging of offensive wars. So they began to make their preparations in the Soviet Union. Everything possible was done, on Stalin's orders, to enable German commanders to carry out military training on Soviet territory. They were given training classes, artillery and shooting ranges, as well as tanks, heavy artillery and military aircraft which, under the terms of the Treaty, they had no right to receive. Similarly, German commanders were given access to Soviet tank-manufacturing plants, the most powerful in the world. Look, remember and copy. From the 1920s on, sparing neither resources nor effort, nor indeed time, Stalin revived the strike power of German militarism. Certainly not against himself. For what purpose? There is only one answer – so that war would be declared on the rest of Europe. Stalin understood that a powerful, aggressive army does not start a war by itself. A mad, fanatical leader is also needed. Stalin did a great deal to see that just such a leader should appear at the head of the German nation. Once the fascists had come to power, Stalin persistently and doggedly pushed towards war. The high point of these efforts was the Molotov–Ribbentrop pact. In this pact, Stalin guaranteed Hitler freedom of action in Europe and, in effect, opened the floodgates of the Second World War. Even before the Nazis came to power, the Soviet leaders had given Hitler the unofficial name of 'Icebreaker for the Revolution'. The name is both apt and fitting. The communists understood that Europe would be vulnerable only in the event of war and that the Icebreaker for the Revolution could make it vulnerable. Unaware of this, Adolf Hitler cleared the way for world communism by his actions. With his Blitzkrieg wars, Hitler crushed the Western democracies, scattering and dispersing his forces from Norway to Libya. This suited Stalin admirably. The Icebreaker committed the greatest crimes against the world and humanity, and, in doing so, placed in Stalin's hands the moral right to declare himself the liberator of Europe at any time he chose – while changing the concentration camps from brown to red. Stalin understood better than Hitler that a war is won by the side which enters it last and not by the one which goes into it first. Stalin granted Hitler the doubtful honour of being the first, while he himself prepared for his unavoidable entry into the war after 'all the capitalists (will) have fought amongst themselves'. (Stalin, Vol. 6, p. 158) Much has been done to uncover the crimes of Nazism and find the butchers who perpetrated atrocities in its name. This work must be continued and stepped up. But while unmasking fascists, one must also expose the Soviet communists who encouraged the Nazis to commit their crimes, so that they could avail themselves of the results of these crimes. The communists weeded their archives thoroughly a long time ago, but what still remains preserved there is almost inaccessible to researchers. I was fortunate enough to work briefly in the archives of the Soviet Ministry of Defence, but quite intentionally I am making little use of secret archival material. Overt Soviet publications are my main source. Even these are quite sufficient to place Soviet communists in the dock with Nazis. My chief witnesses are Marx, Engels, Lenin, Trotsky, Stalin, and all the Soviet wartime marshals and many leading generals. The Soviet communists admit that they used Hitler to unleash a war in Europe, and prepared a sudden blow at Hitler himself in order to seize a Europe which had been destroyed by him. The value of my sources lies in the fact that it is the criminals themselves who speak of their own crimes. I know that on the communist side there are many apologists. I took the communists at their word, so let us allow them to defend themselves independently. Viktor Suvorov. ...