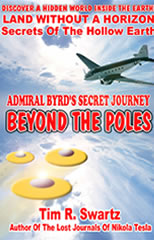 Author : Swartz Tim
Title : Admiral Byrd's secret journey beyond the poles Discover a hidden world inside the Earth ! Land without a horizon Secrets of the Hollow Earth
Year : 2007

Forward. We like to think that we know so much about the world that we live in. We enjoy knowing things like why the sky is blue and why the grass is green. With knowledge comes power and security. We feel secure knowing things that at one time confounded our forbearers. We are secure in our knowledge that our solar system is part of the Milky Way galaxy, one of billions of other galaxies in the universe. We are secure in our knowledge that the sun is in the center of the solar system and that the Earth, along with the other planets, circles the sun. We are secure in our knowledge that the Earth is round and turns on its axis as makes its way around the sun. We like to think that we know so much about the world that we live in. But, in all actuality, there is so much that we just do not know. We loathe this lack of knowledge; it makes us feel frightened and insecure. It makes us feel like how early man must have felt when he stood on the African plains and trembled in fear at the crack of lightning accompanied by the ear-splitting roar of thunder. We feel tiny and insignificant. Because of these feelings, when humans lack real knowledge about something we have a tendency to simply make things up in an attempt to fill that intellectual gap. When we didn't know the science behind lightning and thunder, we created a pantheon of gods whose anger became material in the form of bolts of fire from the heavens. When we didn't know what was beyond the earth and sky, we envisioned a giant turtle that held the world steadfast upon its immense back. When it became clear that there was no turtle holding the universe in place, philosophers placed the Earth at the center of creation with everything in the heavens revolving around it in an eternal dance of celestial obedience. This, however, did not sit well with those who still believed in the turtle. After all, the Earth as a round ball drifting in empty space seemed totally illogical; how could the Earth float magically without something to hold it in place. Where were the facts? Where was the proof? Where was the turtle? Those who believed that the Earth was the center of the universe made fun of the turtle believers. How could anyone believe in anything as stupid as a giant turtle holding the planet on its back? It was abundantly clear that God created the Earth so that means the Earth was the center of every thing. Sorry, no room in God's universe for a big turtle. However, those who believed in an Earth-centric universe did not have long to bask in their glory. A new kid on the block by the name of Copernicus told everyone that their long cherished beliefs were wrong, the Earth, along with the other planets, revolved around the sun. This, of course, seemed pretty rude to the "Earth is the center of creation" believers. Where were the facts they asked? Where was the proof? How could God, who the Bible says made the Earth a special place, not put it in the center of everything? For a while, those who believed in the "Copernicus Theory" were severely persecuted by those who refused to let go of their longheld beliefs. Eventually it became clear that knowledge had once more progressed, leaving the past behind and old beliefs abandoned in the dust. Yet, things never really change. We say that we know so much, when we actually know very little. Geologists say that the Earth at its very center is composed of extremely dense, extremely hot, crystallized iron and nickel. However, there are those who say that the Earth is hollow and inside this subterranean realm there exists a world almost beyond belief; a world that is home to a rich diversity of life and, as some say, civilizations of superior beings who are the true masters of this planet. ...