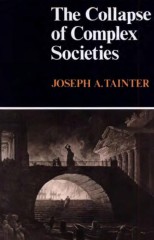 Acknowledgements. Edward Hallett Carr once suggested that Toynbee's cyclical theory of history was the characteristic view of a society in crisis (1961: 37), and others have noted that there is often a concern with collapse at times of distress. While doubtlessly this is true, the present work reflects an interest that has lain unfulfilled since my first exposure to this topic. Its fruition owes much to two persons. Foremost is my wife, Bonnie Bagley Tainter, who encouraged me to transform my interest in collapse, and my dissatisfaction with the state of its study, into this book. Where I had in mind perhaps a few papers, she saw that only a longer treatment would suffice, and the work owes a great deal to her foresight. It was in the course of many conversations with Bonnie that the ideas presented here reached their final form. Both she and our son, Emmet, tolerated the disruption that such a work entails, for the nearly two years needed for research and writing, without wavering in their support. Finally, Bonnie's sharp editorial eye helped smooth the first draft into a more readable document. Thomas King has for several years been dissatisfied with the archaeological research done in the United States under the mandate of historic preservation. To formulate a program of improvement, he organized a symposium for the 1982 Annual Meeting of the Society for American Archaeology on the subject of 'National Archaeological Research Topics,' and invited me to make a presentation. The short paper that resulted was my first attempt to articulate what previously had been vague misgivings about the study of collapse. What is presented in these pages is an outgrowth of that paper, and of Tom's encouragement to undertake it. A number of colleagues with whom I corresponded expressed interest in the work, and responded readily to my requests for references and papers. These were George Cowgill, T. Patrick Culbert, Michael Parker-Pearson, John Pfeiffer, Robert Sharer, Stephen Whittington, Robert Wenke, and most especially, Norman Yoffee. Emily Garber and Carol Raish gave generously of time and effort to help obtain bibliographic materials. I am grateful to Larry Nordby of the U.S. National Park Service, and to various authors and publishers as noted in the text, who gave permission to reproduce illustrations. Sherry Holtke capably prepared Fig. 19, and Scott Shermer developed several computer-generated illustrations. Several colleagues also, upon request, reviewed either the 1982 paper or drafts of the present work, and made welcome suggestions. These include Arthur Ireland, Christopher Peebles, Michael Schiffer, H. Wolcott Toll, Henry Wright and Norman Yoffee. I must especially mention Colin Renfrew and Jeremy Sabloff, series editors for the New Studies in Archaeology, whose interest in the work brought it to its present form, and whose comments led to material improvements. Peter Richards, archaeology editor for Cambridge University Press, and lain White, who meticulously prepared the typescript for printing, deserve special thanks. To all- family, colleagues, and editors - I offer my great appreciation for your help. Joseph A. Tainter. ...