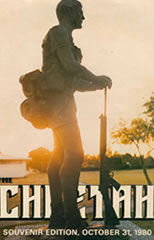 Removal of the trooper. At 1100 hours on 25 July 1980 the Battalion paraded before the Regimental War Memorial to honour The Fallen for the last time before '"The Trooper" was dismantled and moved to a new resting place. In a simple but moving ceremony CSMs solemly read the Rolls of Honour. Padre Bill 'Blakeway addressed the Unit and read a final prayer and then, to the mournful skirl of the pipes, the traditional wreaths were laid by the Commanding Officer, Commando Commanders and the President of the Association, Col John Salt. After the Last Post and Reveille the Battalion, accompanied by the Regimental Colour carried by Lt Bobby Harrison, marched past "The Trooper" for the last time. A small but interested crowd had gathered under a wintry sky to witness the Unit's farewell to a much respected symbol of sacrifice. Regrettably time precluded a more formal occasion and invitations could not be sent out to ERE and past members of the Battalion. "The Trooper" has now been moved and is due to be reerected in the near future. Here ex-members will gather every Regimental Birthday to pay homage to The Fallen. In the meantime the tradition of saluting "The Trooper" continues and notwithstanding the bare plinth RLI soldiers salute as they pass The Holy Ground as a mark of respect to those who gave their lives whilst serving in the Unit. ...