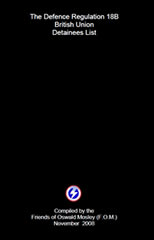 Overview. During the Second World War, the British Government introduced Defence Regulation 18B which suspended the right of Habeas Corpus for the first time since Magna Carta. The new Regulation allowed British citizens to be imprisoned without charge, trial or right of judicial appeal if the Home Secretary considered that their continued liberty was not in the national interest during wartime. The main detentions occurred in two phases, September 1939 and May/June 1940, although some 18B orders continued to be issued long after this latter date. A large number of these orders were directed against members of the British Union of Fascists and National Socialists. The Government did not make public the full list of names of members who were interned though the total number of detainees was reported to Parliament as "About 700" (Parl. Deb. Volume 376 House of Commons C 849-52) and to the War Cabinet as "753" (CAB 65/10 WM(40)). In 1987 a spokesperson for the Home Office confirmed that the total number of British Union members detained was not recorded in Home Office files. A small number of names of those who were arrested was announced in the national and local press at the time. ...