« The LaRouche democratic campaign - A program for - Comparet Bertrand L. - Is it enough merely to be » 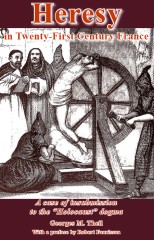 UNSUBDUED, AND PURE OF HEART. A schoolboy born during the war is considered highly gifted both in the sciences and in letters, and sees a very promising future opening up before him. Fate is to decide otherwise. He enters adolescence learning that his father was shot to death in obscure circumstances one day in April 1944. And the First World War had already killed his father’s father. Then other deaths in the family weigh on the boy. The time comes for painful, piercing questions. What is the meaning of these deaths, these wars and, in particular, these Franco-German carnages? Why in 1870, 1914, 1939, were so many Frenchmen sent to their deaths in order to kill Germans? Why had there been that trial at Nuremberg? By what right had the butchers of the winning side sat in judgement of the defeated and condemned them to death? Are we in the presence of a curse? Of a taboo? And does there no longer exist the right to ask questions about certain things? To re-examine history? Why have we needed a law for the repression of sceptics? Who wanted this to happen? Questions. Answers. Encounters. A mind that searches. A heart that is stirred. A life turned upside down. A man unsubdued and pure of heart wants to believe that, at the dawn of the third millennium, a free and open debate on the most tragic page of the twentieth century will at last be joined. Original Title: Un Cas d’insoumission: Comment on devient révisionniste (Samizdat Publications, 2002). Translated from the French by Nuovo Ordine Europeo, Trieste, Italy Historical Review Press Sussex, England 2006. ...

« The LaRouche democratic campaign - A program for - Comparet Bertrand L. - Is it enough merely to be »