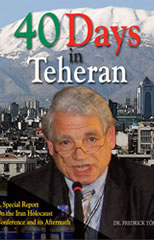 Author : Töben Fredrick
Title : Forty days in Teheran A special report on the Iran Holocaust conference and its aftermath
Year : 2007

This important and timely report from Dr. Fredrick Töben - the world ambassador for Revisionism - presents his groundbreaking new research presented at the Iran Holocaust Conference held in Teheran, Iran, in December of 2006. Inside you’ll find a detailed report from Töben on the conference, who attended, who didn’t, who was punished for attending and what was freely and openly discussed at the meeting and also the conference paper of Töben himself. There’s also dozens of photos of the event, never before published, and inside information you won’t find anywhere else. Additionally, you’ll hear from a bevy of the attendees including AFP and TBR correspondent Michael Collins Piper, Patrick McNally, Herbert Schaller, Mohamed Hegazi and others. Töben also shares news articles printed by the controlled media around the world which went to great lengths to defame Iran and the participants for their search for the truth. Also get an update on Germar Rudolf (the imprisoned Revisionist scientist), a photo tour using scale models which shows that the Treblinka camp could not have been an extermination center and an update on Töben’s own battle with the worldwide Thought Police. There’s lots more inside. Please get extra copies to hand out to friends and colleagues. ...