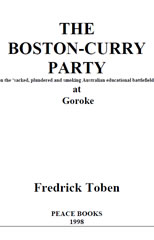 Prologue. When the air is hot and dry, mirages teasingly dissolve the bluish-black asphalt surface of the Horsham-Goroke road into a restless, flickering sea. As the bitumen melts under the merciless midday sun, there emerges from the flatness of the Wimmera Plains a monolith - Mount Arapiles. Mount Arapiles, this ancient protruding mount prophetically heralded the construction of countless grain silos which further break up the seemingly monotonous countryside. The not-so-famous rocky outcrop just next to Mount Arapiles reflects the spirit of the local people. Mitre Rock is indeed a striking likeness of a bishop’s hat. The name is thus a symbol of the spirit of the people who live on these plains. They are hardworking, pious and mostly of Germanic stock. Mount Arapiles and Mitre Rock, though unequal siblings, host a diverse group of enthusiastic climbers. There are the dedicated mountaineers, one of whom, Jon Muir, received an OA for his 1988 Everest climb. He now lives with his wife, Bridget, in Natimuk, who herself in 1997 was likewise awarded the OA for her There are the army recruits who challenge themselves as they scale some of the more demanding vertical walls. There are also the climbers who come from all over the world on pilgrimage to Mount Arapiles - from Europe, America, Japan. Why do they do this, why do they risk life and limb? Some say this activity is character building. It strengthens mind and body. Sadly, over the past few years a handful of these dedicated and experienced men and women - who make up this closely-knit international fraternity - slipped and fell for the last time from Mount Arapiles. Mass tourism has not yet engulfed the mountain. These stony relics of bygone times are not to be confused with the obscenely painted Sisters Rocks, situated on the Western Highway, near Stawell. Here the multitudes rest before continuing their journey to Adelaide. And while they rest, they eat and drink and aim their spray cans at the rocks, there to create in an instant lots of graffiti. Like an animal marking its territory, these tourists leave behind their names painfully emblazoned in many-layered coats of paint. It is almost an act of desperation. No-one knows whether upon their return from Adelaide, their names will still be visible or covered by others. The only hope of immortality is that quick snapshot which proves that it was all real. Mount Arapiles and Mitre rock remain pristine and far away from the pampered tourist’s itinerary. The spray-painting mentality which mutilates the Sisters Rocks has avoided them because they remain a hard target. Only 40 kilometres west of Arapiles there lies the small country town of Goroke. The name derives from an Aboriginal word for magpie. Here, in this sleepy retirement village of about 300 people, there occurred at the local school something quite extraordinary. During 1983 the primary principal, Raymond McCraw, discovered that his secondary English teacher, Fredrick Toben, was quite incompetent. During 1984 the principal used the infamous union agreement’s procedures to prove his case. A few days after the Orwellian year of 1984 had closed, I was, indeed, found guilty and dismissed from the Victorian state teaching service. The reasons given were that I was incompetent and that I had been disobedient. This act, which culminated in destroying my family and my career, was perpetrated by a pack of savages who dared call themselves professional educators. 50 kilometres south-west of Goroke lies the township of Edenhope, the administrative centre of the Shire of Kowree. It was here that in 1962 I matriculated from the Edenhope High School, known today as the Edenhope P-12 College. ...