Töben Fredrick - Where truth is no defence 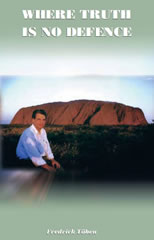 Author : Töben Fredrick
Title : Where truth is no defence I want to break free
Year : 2001

Forewords. The Greatest Dirty Open Secret. In the trials and tribulations of Fredrick Töben one can observe in operation the greatest dirty open secret of our day. In explaining that remark here, I will do my best to be objective, despite the fact that because of the conditions I am to discuss several of my friends have been imprisoned or fined for doing the sorts of things I also do. In October 1997 I received a request from Töben, director of the Adelaide Institute and a Holocaust revisionist, to be a defence witness for him in his hearings before the Australian Human Rights and Equal Opportunity Commission (HREOC). The role would have involved writing a letter for him and perhaps testifying by telephone from my home near Chicago. I resisted this request, pleading a shortage of time and the fact that he had told me, earlier that year in Chicago, that the Australian ‘human rights’ legislation has no teeth and that he did not have to pay any attention to such proceedings against him. Both pleas were true but I had another strong reason for my reticence, which was too complicated to state in these rapid-fire e-mail messages, but which can be explained here in due course. In any case I relented after a few passionate e-mails from Töben. I wrote a two-page letter, intended to be submitted to the HREOC hearings. The letter, dated 5 November, declared: Alas I must say that you are arguably guilty of some of the charges. I looked over Jeremy Jones’ stuff and I infer that the ‘Racial Discrimination Act’ proscribes what might ‘offend, insult, humiliate or intimidate another person or group of people.’ Well, revisionism certainly does the first three! It does not however ‘intimidate’; at least, I have never noticed such a case ... Heated controversy is a price of open debate, the foundation of a rational society. Jeremy Jones was the representative of the Jewish organisation that had brought charges against Töben. I commented on Jones’ letter by declaring Töben guilty. Some defence witness ! ...