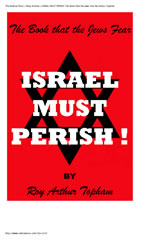 Author’s Preface : What is contained herein is but a synopsis and partial review of the verbatim text of an actual book first published in the USA back in early 1941 when America was still a neutral country. That book, Germany Must Perish! was written by a Jewish writer by the name of Theodore N. Kaufman. Its exact proposals are those contained herein. It is assumed that the reader will already be fully cognizant of the Zionist agenda for global governance that is a given in today’s political reality, especially within the alternative media and on the Internet where Zionist “hate” laws are still not fully in place to restrict the natural flow of ideas and opinions that proceed from historical research and experience. In 1941 Kaufman’s book was a brilliant piece of Zionist Jew propaganda designed to stir up anti-German hatred in America. Some say that it formed the basis of the infamous “Morgenthau Plan” that was later signed in Quebec, Canada by President Roosevelt and Prime Minister Churchill; one designed to dismember Germany after its defeat and reduce it to the status of “a goat pasture.” It was probably remains to this day the foremost example of hate literature ever to have been published and dispensed to the general public. As the reader will surmise from viewing the image of the back page of Kaufman’s book some of America’s most prestigious newspapers and magazines were in full support of the objectives set down in this classic book of Jewish hate literature. Again, the reader is cautioned to bear in mind that I have changed the word “Nazi” to “Jew” in the quote from the Philadelphia Record as I have changed all the other words “German” and “Nazi” to “Jew” and “Zionist,” etc. The striking thing about the vileness of the text is how, today, it seems to roll off the mind’s tongue as if it were as truthful and factual as the rising sun. As such I firmly believe that all of what the Zionist Jews write about others is actually but a reflection of their own inner, perverse, dislocated self. By projecting outward on to others their innate paranoid and deep-seated hatred for the rest of the world they’re able to meet the requirements of the Israeli state’s motto which reads, “By Way of Deception Though Shalt Cause War” and feel a sense of superiority and self-righteousness in doing so. I would humbly ask the reader to be aware of these features as they read both the text and the context in which it was first written. I have, as the saying goes, only changed the names to protect the innocent. As for any further extrapolation I will leave that up to the reader. ...