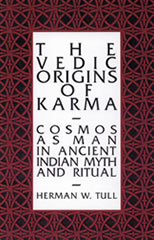 Introduction. J. C. Heesterman has recently observed that the Vedic sacrificial texts propose "a separate self-contained world ruled exclusively by the comprehensive and exhaustive order of the ritual." 1 The closed world of the Vedic sacrifice recalls the larger closure of the Hindu universe, depicted from an early period as an egg "whose total contents can never increase but can only be redistributed."2 As Wendy O'Flaherty has noted within the world egg ''the Hindu cosmos is a series of receding frames, circles within circles."3 This image of circles within circles leads back to the world of the Vedic sacrifice, which itself consisted of a series of concentric circles;4 and so articulates again the close resemblance between the world of the ritual and the larger cosmos. The world of the sacrifice is intentionally made to resemble the larger cosmos. The Vedic ritualists sought, in their own sacrificial activity, to recreate the primordial events which shaped the cosmos. An often-quoted passage that appears in the Satapatha Brahmana thus declares: "This (ritual act) done now is that which the gods did then (in the beginning)."5 What the gods did then was to create the world, an event that the late Vedic texts often depict as having occurred through the sacrifice of an anthropomorphic being, whose dismembered body was formed into the ordered cosmos. However, the death and destruction implicit in the primordial event created an untenable situation for the sacrificer; in particular, the reenactment of the cosmogony would seem to have required the sacrificer to give up his own life.6 The Vedic ritualists attempted to circumvent this actuality by employing various substitutes (ranging from grain and animals to a gold effigy) for the sacrificer's own person. Moreover, the closed world of the ritual, with its carefully delimited boundaries, seems to have been constructed to keep out the reality of death;7 for, just as the sacrificial arena itself represented a symbolic cosmos, so, too, the death that occurred in the ritual was only symbolically that of the sacrificer. ...