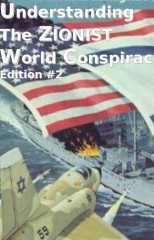 Zionism is a Cultural Cancer That Destroys Nations By Making Destructive Behavior Trendy. The Zionists have emasculated our nation by destroying our pride in America’s Christian history. Without a commonly held memory a nation ceases to exist as a cohesive unit. The Zionists have labeled America’s Christian Founding Fathers as “racists” and “white slavers” while at the same time suppressing the fact that Jews financed and participated in the Black slave trade. The Zionists have promoted multiculturalism, celebrating every culture–no matter how backward and barbaric–except for Western white European culture.. The Zionists have driven our Christian heritage from the public square through the efforts of the Jewish Lobby Groups, the ADL and the ACLU. American children will grow up in a society wiped clean of any vestiges of the Bible, Christ or the Cross. However, the Menorah is still allowed in public displays and in the White House for Hannukah celebrations. The Zionists have torn our borders wide open, permitting, indeed cheering, the Third World immigrants who will soon replace the white Christian American majority. The Jacob Javitzes and the Lautenbergs have designed legislation that will genocide us. They have done all this while simultaneously supporting Israel’s “Jews-only” im-migration policy. The Zionists have pushed, created and profited from pornography and perverse entertainment. The “chosen people” make up 90% of all American pornographers. The Hollywood they run has mainstreamed wife-swapping, common law marriages, fornication, homosexuality, lesbianism, transvestitism, pedophilia, drug and alcohol abuse and self-indulgence. The Zionists have brought homosexuality out of the closet and into our faces through numerous “rights” legislations. Sodomy is shown in their Jewish controlled media and movies as normal, healthy, enjoyable and something to celebrate openly in as brazen a fashion as possible. Six year old chil-dren in our Public Schools are shown videos promoting anal sex between males. The Jews have founded, funded and fronted every homosexual advocacy group in America. With their control of the Public Educational System and Collegiate level academia, they have filled the minds of the young with Marxism, Deconstructionism, relativism, anti-White hatred, and lies about “diversity” and non-judgmentalism. The Zionists have subverted our government. With Zionist control of the media, both print and television, the two major political parties have been steered away from the interests of the European-American ma-jority, rendering us incapable of self-preservation. The war in Iraq, the 9/11 attacks and a possible clash with Iran in the near future, are all results of the Zionist subjugation of the most powerful nation on earth, and the prioritiz-ing of Israel’s concerns over those of the United States. The Zionists have brought radical feminism to American women and girls. Thanks to the steady diet of anti-male, anti-marriage and anti-family books, lectures and college courses from the likes of the Gloria Steinems, the Betty Friedans, and the Susan Sontags, many women now see the prospect of marriage and child-rearing as an impediment to their liberation. Planned Parenthood and the Na-tional Abortion Rights Action League (NARAL) is run from top to bottom by Jews. Unregulated abortion on de-mand is touted in the Jewish controlled Media as a positive social good for the United States. With a large percent-age of abortion doctors being Jewish, the Jews have definitely made a killing out of killing. The Zionists have sold us the packaged lies of egalitarianism. All are equal in intelligence, morality, accomplishments — except of course, for one group. The Jewish “race”, as their own leaders refer to their people, is covertly declared as being uniquely moral and wise. The Jews truly believe they have a God-given right to rule over us. To publicly criticize their ill-gotten power structure, results in being black listed & labeled as an “Anti-Semite”. ...