Vallée Jacques - Anatomy of a phenomenon 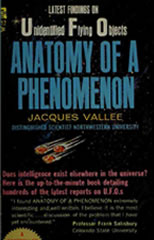 Author : Vallée Jacques
Title : Anatomy of a phenomenon The detailed and unbiased report of UFOs
Year : 1965

About the author : Jacques Vallee, born and educated in France, holds degrees in mathematics and astronomy. He is a consultant on the Mars Map Project, and a mathematician- analyst connected with Northwestern University. Formerly he was a research associate at the MacDonald Observatory of the University of Texas. Before coming to the United States he was a 'government scientist at the Paris Observatory associated with the artificial satellites project, and participated in the theoretical study of a radar alert system, a classified french defense project. ...