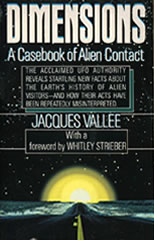 Foreword by Whitley Strieber. There are two things about the UFO controversy that make it uniquely interesting. The first is that it is probably the deepest mystery that mankind has ever encountered. The second is that it has been the object of so much denial despite the fact that it is certainly a real phenomenon. At the very least it is a social issue of the utmost importance, because it has all the potential of a truly powerful idea to enter unconscious mythology and there to generate beliefs so broad in their scope and deep in their impact that they emerge with religious implications for the surrounding culture. The only thing now needed to make the UFO myth a new religion of remarkable scope and force is a single undeniable sighting. Such a sighting need last only a few minutes – just long enough to be thoroughly documented. It will at once invest the extraterrestrials channels, the "space brothers" believers, and the UFO cultists with the appearance of revealed truth. This unfortunate state of affairs has come about for one reason, and one reason only. Our best intellects have methodically ignored the issue of UFOs for half a century, and have thus left the public without recourse in making sense of the incredibly subtle and complex experience of sighting them and interacting with their inhabitants. There are two reasons that the scientific community has been unable to address the issue sensibly. The first is that the phenomenon is so elusive that it cannot be easily measured. The UFO occupants – if there are any – cannot be studied or even engaged in dialogue, and their machines are only rarely seen by trained observers who are also willing to make their observations known to their colleagues. The second is, simply fear. Any explanation of the phenomenon that is now prosaic must inevitably lead to a profound challenge to cherished theories about the nature of mind and universe and man's place in the cosmos. If we come to a correct understanding of the UFO phenomenon, we may well in the process destroy the whole basis of our present beliefs about reality. Sensing this on an almost instinctive level, scientists hide behind the facile posturing of self-styled "debunkers" who can be counted on to distort or suppress unsettling data in order to leave our current ideas intact. The public is left – as I was left – facing the visitors in the middle of the night without any notion of what they are, where they came from, or how to act in their presence. Absent any genuine understanding of the phenomenon, one is forced to accept that it is what it appears to be. As Dr. Vallee points out in this masterful and ground-breaking analysis, that is exactly what we should not be doing. He places this modern UFO experience firmly in its historical context as the latest manifestation of a phenomenon that goes back at least as far as recorded history. Thus, at a stroke, he redefines it as a part of the fundamental mythology of human experience and enables us, for the first time, to begin to raise questions about it of sufficient depth and resonance to be meaningful. In the process he takes us on a grand journey through the annals of strange and anomalous human experience. He reveals an appalling truth: the phenomenon has been with us throughout history – and never, in all of that time, have we been able to deal sensibly with it. Whatever it is, it changes with our ability to perceive it. The fifteenth century saw the visitors as fairies. The tenth century saw them as sylphs. The Romans saw them as wood-nymphs and sprites. And so it goes, back into time. One of the thousands of people who wrote me concerning my book Communion had this fascinating insight: "Whatever cosmology or mythology I was immersed in seemed to be the factor for shaping the context and attendant imagery of my experiences, which I believe are essentially of an abstract nature." And yet I myself have faced physical beings. The context of my own experience, with extensive witness by others, makes it clear that the phenomenon can emerge as an entirely real, physical presence that is quite capable of manipulating its environment. The next moment, though, it can evaporate into thin air, leaving not a trace of what was a moment before an immense and overwhelmingly real presence. ...