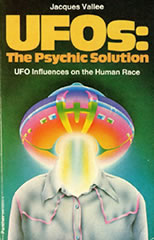 Introduction. In the last twenty-five years, thousands of people have reported the persistent appearances of UFO phenomena. A careful examination of the patterns of these reports has already shown that they follow definite laws for which no explanation has been found. These statistical facts have been adequately documented elsewhere1 and will not concern us here. Instead we will examine a more exciting subject: the role of this phenomenon and its impact on each of us. The aim of this book is to offer a new point of view on UFOs. It has become important to pose the UFO 'problem' in a new fashion because our cultural beliefs regarding the existence of forms of consciousness elsewhere in the universe are undergoing major shifts. Perhaps these shifts have been precipitated by the realization that outer space has been opened to man and by the feeling of the smallness and the isolation of our planet brought back by astronauts. Perhaps they are flowing from the hope that .other civilizations may already have solved the economic and social problems that concern every country on earth today. The scope and impact of this cultural change have received some attention, but no attempt has yet been made to understand its basic mechanism. ...