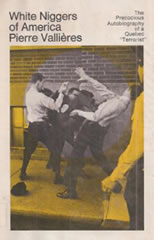 Foreword. In reading this book it is important to remember the following facts. 1. The book was written in prison, immediately after a twenty-nine-day hunger strike, under particularly difficult conditions. It was written in the midst of the constant noise of cells being opened and closed by an iron hand and of guards and prisoners shouting back and forth, and within the framework of an absurd discipline (called prison rules), invented and applied for the purpose of brutalizing the inmates as much as possible. The section in which Charles Gagnon and I are still held as these lines are written is reserved chiefly for the mentally ill, drug addicts, men accused of homocide and facing possible life imprisonment, prisoners in depressive states and, lastly, "political" madmen, like Charles and me, whom the officers regard more or less as "deranged." Very often one or another of our jail mates slits his veins out of despair, or simply to attract attention. For one of the chief characteristics of prison life is the boundless solitude each of us feels, especially during those hours of depression when it becomes impossible to communicate with others. ...