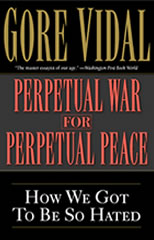 Author : Vidal Gore
Title : Perpetual war for perpetual peace How we got to be so hated
Year : 2002

Introduction. It is a law of physics (still on the books when last I looked) that in nature there is no action without reaction. The same appears to be true in human nature-that is, history. In the last six years, two dates are apt to be remembered for longer than usual in the United States of Amnesia: April 19, 1995, when a much-decorated infantry soldier called Timothy McVeigh blew up a federal building in Oklahoma City, killing 168 innocent men, women, and children. Why? McVeigh told us at eloquent length, but our rulers and their media preferred to depict him as a sadistic, crazed monster-not a good person like the rest of us-who had done it just for kicks. On September 11, 2001, Osama bin Laden and his Islamic terrorist organization struck at Manhattan and the Pentagon. The Pentagon Junta in charge of our affairs programmed their president to tell us that bin Laden was an “evildoer” who envied us our goodness and wealth and freedom. None of these explanations made much sense, but our rulers for more than half a century have made sure that we are never to be told the truth about anything that our government has done to other people, not to mention, in McVeigh’s case, our own. All we are left with are blurred covers of Time and Newsweek where monstrous figures from Hieronymus Bosch stare out at us, hellfire in their eyes, while the New York Times and its chorus of imitators spin complicated stories about mad Osama and cowardly McVeigh, thus convincing most Americans that only a couple of freaks would ever dare strike at a nation that sees itself as close to perfection as any human society can come. That our ruling junta might have seriously provoked McVeigh (a heartland American hero of the Gulf War) and Osama, a would-be Muslim Defender of the Faith, was never dealt with. ...