Vikernes Varg - Guide to the norse gods and their names 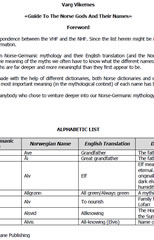 Author : Vikernes Varg
Title : Guide to the norse gods and their names
Year : 2001

Foreword. Originally this booklet was a result of correspondence between the VHF and the NHF. Since the list herein might be interesting to others as well the VHF took the initiative and made a booklet out of this information. This booklet contains most of the names in Norse-Germanic mythology and their English translation (and the Norwegian version of the names and some old Germanic versions as well). To understand the meaning of the myths we often have to know what the different names mean. When we know what the names mean it suddenly becomes clear to us that the myths are far deeper and more meaningful than they first appear to be. The translations of the names have been made with the help of different dictionaries, both Norse dictionaries and etymological dictionaries. There are additional meanings to the names as well, but only the most important meaning (in the mythological context) of each name has been included in this booklet. I hope this list of names will prove useful to anybody who chose to venture deeper into our Norse-Germanic mythology, and thus our soil and spirit. Varg Vikernes Nîþarôusu, Þulá Medio Sólmánaðr MM a.y.p.s.. ...