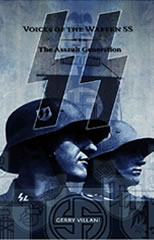 Foreword. I am absolutely honored to introduce you to Gerry Villani and his latest work of art. Gerry’s focus has always been on telling the stories that no one else will tell, giving a voice to those that no one has listened to, and doing it in a way that others have not. With his last book “Soldiers of Germania, the European Volunteers of the Waffen SS”, he gave us insight into the experiences of men from all across Europe who volunteered to serve as foreign SS soldiers. The story he brought to us is one that many do not know. It is commonly implied that the German Army, and German soldiers, were all of undiluted German heritage, when in fact men from over 30 countries served in the SS. Gerry has granted us access to the lives and perspectives which are unique and widely unknown to the world. The route that many stories throughout history take is a path that from far away looks smooth and truly has been worn into a comfortable retelling of events. Once again Gerry stepped off the beaten path and into the weeds. He has compiled through personal research the up close and personal stories that many are too afraid to tell or be associated with. We find him in the trenches with the soldiers. We find him sitting in the shadows of conflict. He diligently transcribed the stories of these veterans, stories which have long gone untold - buried in the depths of memory, or whispered through the din of battle, nearly lost in the fog of war. I picture him, but a silhouette, following closely behind these soldiers as they say goodbye to their families and march towards their destiny. What Gerry has done for history is invaluable and what he has done for these men is unparalleled. But a glaring question still remains…why? Why would someone go through the troubles of searching the world for the tales of a few men whose lives have been eagerly forgotten by the people they once fought to protect? What makes a man voluntarily suffer the loss of sleep, time with loved ones, and his peace of mind - only to spend months chasing ghosts? For Gerry the fascination with mankind’s penchant for conflict started at a young age. Whenever he visited his grandparents, he was regaled with stories of the war. First-hand accounts of battle and the impact that war had on the world enchanted Gerry. Peering through the eyes of his grandparents, he learned that the actions of individual men created and shaped the world we live in today. Seeing that the individual - when helped by fate, luck, and chance - could affect not only his surroundings, but the globe, would start Gerry down a path in life from which he would never divert. With his latest book “Germania’s Assault Generation”, we will be brought back into a world at war, where men of many nations believed in a united Europe, and joined the Waffen SS with enthusiasm in hopes of accomplishing that goal they believed in. We read the stories of Legionnaires, people of so-called “Germanic descent”, who originated from occupied territories. With an insight into the motivations and internal conflicts that these volunteering soldiers went through, how their cultural backgrounds affected their positions in the military, and the way they viewed conflict and battle, this book is another unique take on the soldiers who fought in World War Two. I know that you will enjoy this book as much as I did, and it is my absolute privilege to present to you “Voices of the Waffen SS – The Assault generation”. ...