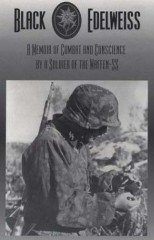 Author : Voss Johann
Title : Black Edelweiss A memoir of combat and conscience by a soldier of the Waffen-SS
Year : 2002

This book was conceived and for the most part written a long time ago. I was then a prisoner of the US Army from March 1945 to December 1946. The idea of editing and publishing the manuscript had never crossed my mind in the following decades. The war and what followed were a closed chapter. The subject surfaced only when President Reagan and Chancellor Kohl visited the German military cemetery in Bitburg, Germany, in 1985. This visit raised worldwide protests, namely because some young Waffen-SS soldiers were buried there. Including these soldiers in the memorial ceremony was widely regarded as an outrageous affair. Since then the indiscriminate damnation of Waffen-SS soldiers has become even more pervasive and intransigent. Apparently, in the sixty years since those soldiers fell in battle, the rubble, which the collapsing Reich heaped upon the course of their short lives, was not removed. The book is a personal account of my war years, first at school and then with the Waffen-SS, which I joined early in 1943 at the age of seventeen. I saw combat with the 11 th Gebirgsjiiger (Mountain Infantry) Regiment for a year and a half, mainly in the far north and later at the western frontier of the Reich. For all the differences in theaters of war, troops, and personal backgrounds, however, I think that this book is also about the volunteers of my age group in general; about their thinking and feeling; about their faith and their distress; and about their endeavors to live up to their ideals, even when hope was lost. My regiment was part of the 6th SS-Gebirgsdivision (Mountain Division) Nord, which fought from the summer of 1941 until September 1944 in the wilderness of the North Karelian front, near the Arctic Circle. The division belonged to the German 20th Gebirgsarmee (Mountain Army), which defended the northern half of the Finnish-German front, a line stretching some 900 miles from the Arctic Sea down to the Gulf of Finland. When Finland quit the war in September 1944 and the 20th Army had to leave the country, the Nord became the rear guard of the southern Corps and fought its way along the Finnish-Swedish border up to northern Norway. In the bitter cold and darkness of the Arctic winter, my regiment marched down the Norwegian coast until it reached the railway at Mo i Rana, ending a trek of some 1,000 miles. Rushed to Oslo by train, and after a few days rest in Denmark, we moved to the Western front, where the Nord participated in Operation NORDWIND in early January 1945, a bloody clash with the US Seventh Army in the snow-covered hills of the Lower Vosges. In the battles and the war of attrition that followed, the frontline units of the Nord were destroyed bit by bit. When the front reached the Rhine in March 1945, only remnants of the division remained. The rest was annihilated in the hills northeast of Frankfurt on 3 April, just after Easter. I had no intention of writing military history, a field in which I am no expert. Instead, I have chronicled combat the way I saw it, from the perspective of an average soldier who, more often than not, lacked an overview of the general situation, but who was intimately familiar with life (and death) in the foxholes. What I wanted to do was to portray these young volunteers under arduous physical and mental conditions and to show how they reacted. Likewise, the characters of my story are real, to include those in my family as well as in my unit, but I have changed their names. They stand for a European youth who, at that time, saw themselves actively united in an effort to resolve a secular conflict between the Occident and Bolshevism. Since that time I have enjoyed a rich professional life as a corporate lawyer with various international ties. My desire to understand the historical, political, and moral aspects of World War II has always been there, however, resulting in my reading of a wealth of material and then grappling with its inherent drawbacks and inconsistencies. I chose not to follow the advice of some, to rewrite the prisoner's manuscript from the perspective of a man of my age. Such a balanced view of the past, based on so many decades of experience, traveling, and reading, in particular about the crimes committed behind the frontlines in the East, seemed inappropriate for the voices of those combat soldiers who did not live to mature and grow, but instead had to die young in their limited perception of the world. The same notion applies to those who survived and found themselves, at that age, indicted and convicted as members of a criminal organization. My generation's task was to clear away the ruins of the war and to rebuild our country. As I said before, however, there is still much rubble left. If this book would uncover a small part of that long-hidden ground, I would have done my part for my comrades. Johann Voss. ...