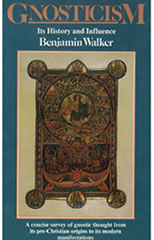 Preface. This book surveys the gnostic religion from its beginnings, outlines the course of its expansion down the centuries, and indicates the extent of its continuing influence in modern times. Gnosticism has never died out, and in many ways remains a living creed, which is perhaps its chief claim on our interest today. What is attempted here is a presentation of the broad flow of a major heretical movement that is both highly mystical and highly provocative. To deal with the vast quantity of data in limited compass has presented certain problems. Much of the material can only be abridged, and the difficult, and frequently discrepant versions, collated - a process that has obvious drawbacks, for not all the inconsistencies can be reconciled. The main ideas and principles of the gnostics have been set down in the light of recent discoveries, and it is hoped that the basic strands have been separated from the ravelled skein and a pattern laid out as lucidly as the complex and often obscure facts permit. I have outlined the teachings of the leading gnostic thinkers, together with the essential particulars of the more important sects, without going into the subtler theological distinctions between them. I believe that to the general reader the primary interest in the subject does not lie in these minutiae, but in the principles underlying the movement. ...