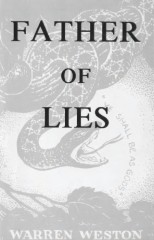 Preface to the new edition. The serious reader may be aware already of the plan for a oneworld, super-government. The plan stipulates complete equality for all, that is, reducing every one to the same, lowest human level. Through intermarriage, all the races are to be homogenized, - like the milk with no cream, no savor. To preserve the appearance of individual and national freedom, a superficial form of democracy is being established in all lands; but the control will rest in the hands of the hidden, would-be world rulers. According to plan, religion which exercises a tremendous influence on human lives, is to be homogenized, too. The principal faiths today differ in their conception of God and what is right. Moreover, belief in God, and in truth, freedom, equity, is incompatible with the idea of complete equality, since this belief inspires men to develop their several, innate talents and to rise to higher planes. Hence, in order to homogenize religion, the plan would substitute for the Worship of God, the Worship of Man. The worship of man is rooted in many primitive cults. These appeal to the lower instincts, and engender hate, malice, deceit. They are the basis of occultism today. The following pages, first published nearly 30 years ago, attempt to show how some of these primitive faiths deify man, and how they have been embodied in modern esoteric structures. ...