Weyl Nathaniel - The geography of intellect 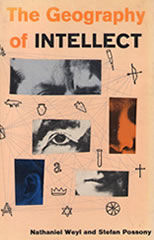 Preface. One of the most significant developments of the present century is the progress that has been made in disintegrating merely material barriers to human well-being. Virtually infinite energy resources are at present a technological possibility. As this possibility becomes a reality, energy can be directed at will to the synthesizing and shaping of structurals and foodstuffs. Barring a continued and indefinite population explosion, the problem of human want has become soluble. The elimination of want presupposes, however, that the societies faced with the challenge have the requisite brain-power either to innovate in science and technology or else to apply the techniques which others have invented. The available evidence suggests that brain-power of this sort does not exist, either actually or potentially, in the requisite quantities amOng all nations, peoples and races. The resource which seems most critically in short supply on a global scale is human intelligence, the capability of utilizing science and technology, organizing productive processes rationally, creating and maintaining those institutions vital to an orderly and dynamic society and sweeping aside those ideologies, superstitions, tabus and obsessions which serve as impediments to the attainment or preservation of modern civilization. ...