« Zoller Israel Anton - At the root of it all... - Why are jews leading the Alt-Right and White » 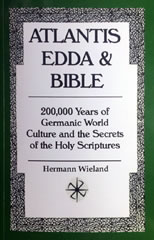 Foreword to the 1st Edition : It was anticipated that Friedrich Döllinger's publication Baldur and the Bible would arouse a stir in both the common man and the theologians and that it would cause a serious examination of the future of the German Aryan peoples as well as raise the most important questions of the Bible and of both Judaic- and Aryan-Christianity. Döllinger succeeded in that his was the first work to show us the proof that Jesus was not a Jew, but in fact an Aryan, and that therefore Christianity originated from an Aryan-Germanic source and that many of the early Jewish cultures and the allegedly Jewish culture of Palestine were indeed Germanic instead. It is thus that we Germans have, for 2,000 years, been instilled by the Jews of their being the “Chosen People” and of the supposed high cultural value of their tribe when in fact it, as proven, it has been nothing more than a crude forgery, and, as most likely, a calculated deception on their part. It remains so for those Bible-believing and Bible-loving folk among us, but still there are a lot of Bible mysteries which still need to be addressed. And it is precisely this mystery, this in particular out of the many Bible mysteries from the Psalms to the books of the Prophets to the Revelations of St. John, that has in recent years thrown tens of thousands of German citizens into a sort of religious madness. ...

« Zoller Israel Anton - At the root of it all... - Why are jews leading the Alt-Right and White »