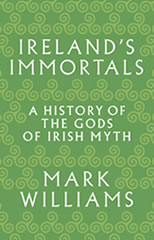 Preface. This book is the story of a nation’s fantasy, and of the crossing-places where imagination meets belief. Its purpose is to trace the evolution of the divinities of Irish mythology-most frequently known as the Túatha Dé Danann or ‘Peoples of the goddess Danu’-from the early Middle Ages through to the present. But who are the Irish gods? Often people who love Greek or Norse myth have never heard of the indigenous divinities of Ireland. Such elusiveness is their calling card: they dissolve into the landscape, here one minute, gone the next. At times they resemble the Olympian divinities as a family of immortals ruled by a father-god, but at others we find them branching into a teeming race of supernatural nobility, an augmented humanity freed from ageing and artistic limit. Paradox is key, for these gods are also fairies; they are immortal, but-like the Norse gods-they can be killed. They are simultaneously a pantheon and a people. ...